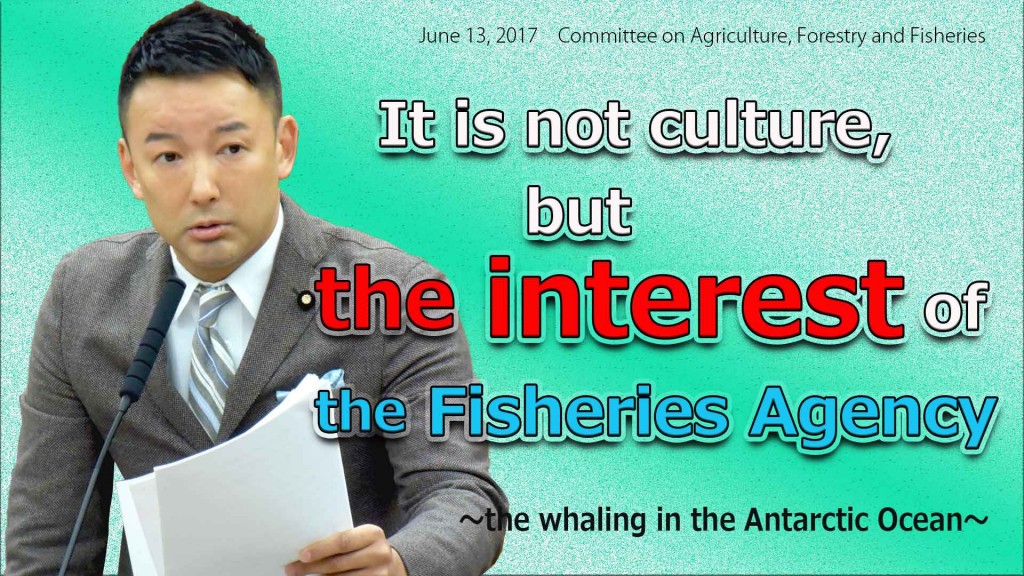 Q: Taro Yamamoto, Member of the House of Councilors:
(Self intro)
I do not deny that whaling is part of Japanese culture. My angle is that there is a problem with the way whaling is carried out.
First, may I ask how many times you have eaten whale meat so far this year?
How many grams in a year?
How about last year?

The major seafood companies discarded their whaling departments and combined them to form Kyodo Senpaku Co., but the company was unable to make ends meet and in 2006 sold all of its stock to five bodies (“incorporated foundations”) under the jurisdiction of MAFF.

Please tell me the names of three of these companies.

A: Government spokesman, Mr. Kazuo Sato:
The three companies conducting whaling were at the time known as Kyokuyou, Nippon Suisan, and Maruha.

Q: Yamamoto: In Reference material No.1: there is an underlined section, comments from the companies leaving the whaling business.
Nissui (=Nippon Suisan): “For people who ate it long ago it may be nostalgic but other kinds of meat are tastier”, Kyokuyou: “Young people don’t eat whale meat”, Maruha Nichiro: “Whaling ships cost billions of yen and we can’t make ends meet.”

They abandoned whaling because it didn’t make business sense. Kyodo Senpaku is effectively a national enterprise. At the time, the sale of whale meat was intended to cover the cost of the research whaling program, but domestic consumption had already been taken over by other foods.

At a time when there were plentiful supplies of tastier meats such as beef, pork and chicken, the cost of going all the way to the Antarctic to catch something that not many people wanted to eat, ate up all the profits in the glutted meat market.

I hear that to cover the expenses of Institute of Cetacean Research (ICR) and Kyodo Senpaku, funds have been diverted from the budget for reconstruction (after the East Japan Earthquake), borrowed from the Overseas Fishery Cooperation Foundation of Japan and from the “project to assist the establishment of profitable fisheries”, as well as from private banking companies.

What it means is that without pouring in 5 or 7 billion yen of taxes, it can’t make ends meet.

It is quite clear that it is not a valid business prospect. So why insist on going all the way to the Antarctic?

Whaling is part of Japanese culture but when we tell other counties not to interfere in our culture, the story gets incoherent. The reason is that the Japanese whaling in the Antarctic has no link to culture.

Changes in the connection between humans and whales.

Whales were originally caught when they became stranded and immobile, known as “yori-kujira” or “nagare-kujira”

The trapping of live finless porpoises [Sunameri =Neophocaena phocaenoides] in the Inland Sea and belief in the whale as a religious object in certain regions form the beginnings of the cultural connection with living whales.

This is the cultural connection. It amounts to the protection of “tangible and intangible cultural assets” and, in my opinion, should fall under the jurisdiction of the Agency for Cultural Affairs.

Is there any movement in the Agency for Cultural Affairs to preserve the historical and cultural aspects of traditional whaling in Japan at present?

Regarding the netting of whales and the changeover to the harpooning of netted whales, we have records up until the Meiji Era……

Yes. These traditional methods are no longer in use, so whaling itself is not regarded as a cultural asset in need of preservation.

However, regarding culture related to whaling, in the Kumano area of coastal
Wakayama…..

Yes. There are none* at present.
[* i.e. movements in the Agency for Cultural Affairs……etc.]

Q: Yamamoto:
Due to lack of time, may I ask you to keep it short?
Yes or No?  The answer was; no.
If it is to be called a cultural matter, then it looks as if some more thought needs to be given to how things are organized, doesn’t it.

But nothing is being done.

After the war, Antarctic whaling was re-started to solve the food crisis, and for a while whale meat became a common food nationwide.

At the same time, coastal whaling declined, leading to over-harvesting in the Antarctic.

The current system of whaling on the other side of the globe is not a cultural matter but arose from a temporary measure to solve the postwar food crisis
It is meaningless to claim that Antarctic whaling is related to the culture of aboriginal whaling, fostered over the generations in Japan.

I believe parts of the traditional forms of whaling can be regarded as culture, but the postwar whaling in the Antarctic and the indiscriminate overhunting there are not to be labelled “culture”.

The outside world has offered to recognize coastal whaling, instead of Antarctic whaling, on at least three separate occasions but Japan has refused every time.

The first time was in 1988 in unofficial talks in Tokyo on the “United States-Japan Fishery Agreement.” Evans, the director of NOAA, told Mr. Naohiro Tanaka, head of the Fisheries Agency, that he could support the reopening of coastal whaling in Japan at the IWC talks, on condition that Japan abandoned Antarctic research whaling, but Japan did not take up the offer.

The second time was in 1996, when it was proposed at the 49th Annual IWC meeting in Monaco, but Japan declined.

The third time, in 2010, when Japan declined a proposal from IWC chairman, Chilean representative Cristian Maquieira. Don’t you think it makes Japan look ridiculous to insist that whaling is cultural and simultaneously reject an opportunity to re-open coastal whaling?
Is there some other objective in the Antarctic Ocean? When Japan is asked if it is searching for energy sources or something, the answer is always a very clear“No!” So what’s it really all about?

It’s no wonder that Japan’s research whaling is subject to international criticism.

Why is that? Reference material No 2

The pale blue line indicates the boundary of the Southern Ocean Whale Sanctuary as designated by the IWC in 1994.

The pink line indicates where Japan is carrying out whaling.

[SPV N.B. He is using the katakana-ised English word, which in English means
exactly the same as the Japanese term (literally “sacred zone” ) he uses to explain it. Hence the tautology….]
What does the word “sanctuary” mean? It’s a sacred area, a wildlife refuge!

Wildlife protection zones and bird protection reserves, for example, are sanctuaries; intended to protect wildlife from the threat of extinction.

So whaling in this sanctuary and retailing the meat is no different than, for example, hunting birds on a wildlife reserve and selling them as “yakitori”!

Hunting on wildlife preserves designated by public bodies is, of course, prohibited.

Japan is carrying out whaling in this Southern Ocean Sanctuary under the name of “research whaling”. Yes, there are other countries which carry out whaling.
But none of them has hunted in the sanctuary since 1988m even under the guise of research. The other countries are all whaling within the restrictions of coastal whaling.

The fact that, even in these circumstances, Japanese politicians feel no embarrassment in demanding that the rest of the world permit its whaling in the Southern Ocean makes me afraid for Japan.

While on the other hand, Japan rejects proposals to permit coastal whaling in replacement.

With a stance like this, am I the only to think that these protestations that “whaling is culture”, and this talk of “protecting local fishing communities”, sound more than a bit thin?

How many humpbacks did the Fisheries Agency announce they would take from the Southern Ocean in 2005? The number alone will be sufficient.

Time is short. The number has already been published.

[SPV: The chairman stops the stenographer.]

[SPV: The chairman restarts the stenographer.]

A:Government spokesman. Sato Kazuo:
Excuse me, I will reply. The figure was exactly 850 minke, and..

A: Government spokesman, Mr. Kazuo Sato:
The figure was 50.

Q: Yamamoto:
They deliberately stipulated that they would take 50 humpbacks as well as 50 fin whales; it was a proclamation. And this inflamed the anti-whaling movement.
And then the situation become one where you could practically blame the Fisheries Agency for the nurturing the growth of Sea Shepherd! That’s what it amounts to.

By proclaiming in 2007 that they were going to take 50 humpbacks from the Southern Ocean Sanctuary, the Fisheries Agency, by its own hand, poured huge quantities of oil on the flames of the anti-whaling movement in the Southern Hemisphere.

The whale-watchers of Australia and New Zealand are so fond of the humpbacks that they have identified and named many of those in the Southern Ocean. I hear that there was panic over which [SPV The Japanese uses “who”.] of them might be killed by Japan’s whalers.

Until then Japan’s research whaling had been taking minke whales, of which there are plentiful resources. They are not the target for whale-watchers.
It would have been difficult to raise much money to defend the minkes.
But because Japan announced it was going to kill 50 humpbacks, the anti-whaling organizations had no trouble collecting all the funds they could want.
It was as ridiculous as lighting a fire with one hand while extinguishing it with the other.
There is so much of this nonsense, but not enough time, so I’ll try to sum it up.

Why don’t we just stop spending tax resources on these trips to the Antarctic？
Isn’t the real goal to make sure we win our right to coastal whaling? If we spent all the money that goes into the Antarctic on restoring coastal fisheries, we could really help the local fishing communities.

In my opinion, the current Bill has no relation to the matter of preserving whaling culture. They just don’t want to give up going to the Antarctic. To be frank, this Bill is simply out of date.

In the Bill, there is a proposal that excess meat can be consumed by issuing it for school meals. This is just a way to make it appear that consumption has risen.
What’s the point of all this effort? It’s not even a profitable business!
There isn’t enough consumption. At the same time they complain that it is culture and that there are people who want to eat whale. In that case, isn’t the best thing to do to consolidate our rights to coastal whaling?

Yamamoto:
I see. Because it perpetuates the warped system of whaling, I cannot support this Bill by any means. I would like the members of parliament to consider the Bill again. I ask you: Will this Bill will truly improve Japan’s standing in the world, confirm whaling as a part of Japanese culture or provide tangible support for the fisheries industry?
I will close here.